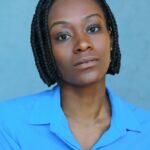 Cassiopeia Berkeley-Agyepong is an actress, singer and theatre-maker from Croydon, passionate about new writing in theatre and opera.

Cassi trained as an actor at the Royal Academy of Music, having previously studied Music at the University of York. She is a dramaturg with Orange Tree Theatre’s Writers Collective, an Associate Artist of the National Youth Theatre, and a reader for the Bruntwood Prize. In 2018 Cassi made her West End debut as a performer in Caroline, or Change, she has since toured with The Phantom of the Opera and participated in workshops of new musicals at the Park Theatre, Actors Church, and National Theatre Studio. In 2020 Cassi co-founded Speaks of Rivers, a physical theatre company who use puppetry, spoken word and music to create original stories for young audiences. Her debut play Shuck ’n’ Jive co-written with Simone Ibbett-Brown premiered at Soho Theatre in 2019, is published by Oberon Modern Plays, and is currently available to stream as part of Soho’s first on-demand film festival.